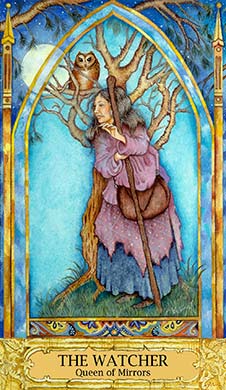 For this week’s Chrysalis card I chose The Watcher, our resident prophet archetype. But first a few choice words about prophecy.

Prophecy, at least in the Classical sense, is not about painting a perfect picture of the future but about a fresh interpretation of the frayed canvasses of the past. Watchers envisage the future not as a product of causal, linear progressions but as an emergent property of recurring cycles.

A watcher’s mind projects the Big Picture of an “Eternal Now,” where past, present and future are simply convenient and mostly meaningless human constructs.

Prophecy is not a “gift,” but forthrightly an acquired skill set. Most adults can become adept at reading cyclical patterns and “predicting” the future using little more than synchronicity, creative imagination and solid historical perspectives. 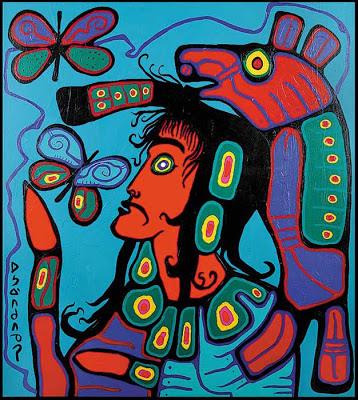 In Norval Morrisseau’s painting, the bear-shaman converses with a butterfly, the preeminent symbol of the psyche. Psyche is not something within us; we exist within psyche. Our common goal is to become one with psyche, one with higher Self.

When Self has become fully formed and informed by psyche, when Self looks destiny in the eye, only then can we humans, strapped to the straight-backed chairs of mortality, leave the chrysalis.

Watchers, shamans and countless other soul-butterflies have left their chrysalis behind forever and discovered their destiny. They are the prophets of our time.

When we Westerners think of prophecy, we usually conjure up a familiar Bible story from Sunday School, church or Charlton Heston. A case in point:

Regardless of whether you believe in a monotheistic God (the Chrysalis schema embraces spiritual naturalism), at least to some degree the mythology of Jesus the Hebrew Prophet has helped shape your worldview. Jesus made many predictions. For example, he predicted that the Jewish Temple would be destroyed: “Not a stone will be left unturned.”

Many Biblical scholars regard such predictions as prophecy historicised rather than as history remembered, an important distinction. The former implicates disingenuous 20/20 hindsight; the latter genuine 20/20 foresight or true prophecy. Let’s choose foresight. How could Jesus, an obscure prophet from Nazareth, as well as many other Hebrew prophets, have foreseen the destruction of the Second Jewish Temple? 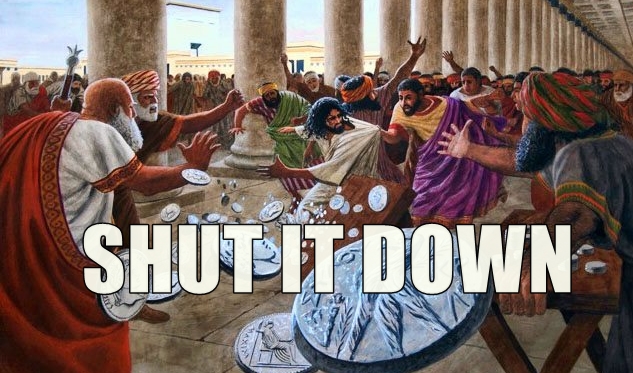 Well, a Talmud scholar would explain simply that the Jewish Temple had been defiled and, accordingly, would certainly be destroyed. But the temple was not defiled by hardworking money changers, who were an important facet of temple life and commerce. A foreign Jew on pilgrimage to Jerusalem was unable to buy doves for sacrifice using foreign currency. He first had to convert it to shekels.

The Herodian Temple became a symbol of self-righteous power and gross indulgence rather than of holiness, perhaps not unlike like today’s Vatican. Jesus’ tirade was not aimed at money changers, per se, but at the ungodliness of what Herod’s Temple and King Herod himself represented  – a den of corruption, greed and power. By tossing a few tables and bird cages about, Jesus in fact mimed the destruction of the temple. That act of sedition was not lost on the Pharisees and Romans.

That contrived act itself was both prophetic and purposeful. In Roman law, sedition was punishable by death. Jesus didn’t “lose his temper,” regardless of what Pastor Tim may have you believe.