One of my great delights in watching Game of Thrones for 6 seasons going on 7 has been watching Arya Stark, as played by Maisie Williams, grow up physically, mentally and spiritually. I find Arya to be absolutely enchanting, as would any devout Jungian.

Arya littlerally transforms from a little lost girl into a warrior woman on the archetypal scale of Boudicca, Brigantia and Diana/Artemis, the great huntress moon goddess who has informed the female warrior archetype for ages.

In Chrysalis Tarot, warrior goddess attributes are manifested in Morgan le Fay, the Sorceress, although our deck is chock-full of other strong female archetypes.

That’s one of the qualities that sets Chrysalis apart.

I’m also an Arya Stark fan because, in the New Paradigm to come, it is strong women who will trailblaze the future of Western Civilization. Our civilization is presently in decline, as foreseen by most philosophers of history worth their salt and aware of historical cycles. But eventually it will give birth to a new civilization heralded by a Second Golden Age of culture.

A strong woman, mind you, is not a woman whose heart is set on being and behaving a man, like Cersei in GoT, but one who is fully and truly female in her own psyche. 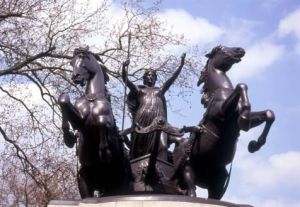 Pictured above are Morgan le Fay. the Sorceress from Arthurian legend, and Queen Boudicca. The majestic statue of Queen Boudicca, Queen of the Celtic Iceni tribe that defeated the Romans, is located near Westminster Bridge in London.

3 thoughts on “Beyond the Wall”