Dean Radin, Ph.D., has pursued the most mind-boggling fringes of science – ESP, telepathy and other wonders – earnestly and with excellence for decades. He is the chief scientist at the Institute of Noetic Sciences (link is external) (IONS) in Petaluma, CA, a next-level research and educational organization founded by the late astronaut Dr. Edgar Mitchell. Dr. Radin also worked on the United States government’s top secret psychic espionage program known as Stargate.

His new book, Real Magic (link is external) (Harmony, April 10), is a triumph of an open mind over limitations. As his publisher points out – what was magic two thousand years ago is scientific fact today. No less than Brian Josephson, Nobel Laureate in Physics and Emeritus Professor of Physics, University of Cambridge calls it,  “A thought-provoking book. The author makes a convincing case for the reality and significance of magic.”

His publisher states: “Radin has spent the last forty years conducting controlled experiments that demonstrate that thoughts are things, that we can sense others’ emotions and intentions from a distance, that intuition is more powerful than we thought, and that we can tap into the power of intention (think The Secret, only on a more realistic and scientific level). These dormant powers can help us to lead more interesting and fulfilling lives. ”

The book begins with a history of magic, continues on to a review of the scientific evidence for it and concludes that magic will play a key role in frontiers of science. 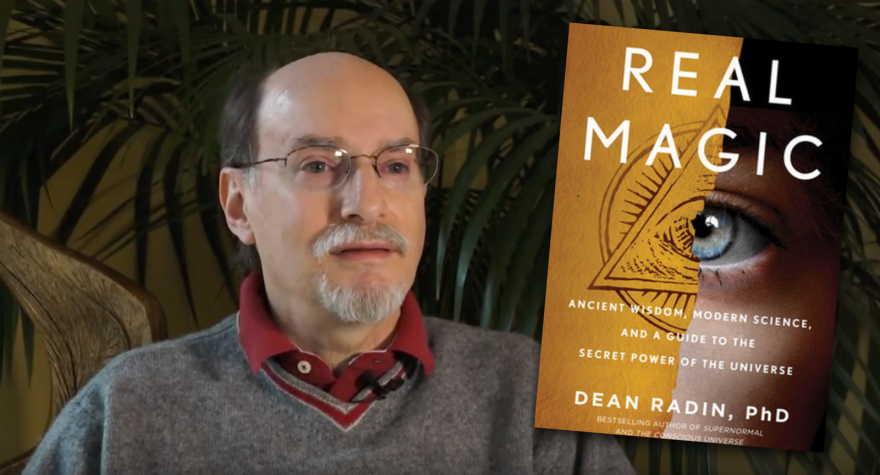 Please tell me about your new book.

DR: The unique aspect of Real Magic, which may end up in the occult, metaphysical or religious section of most bookstores, is that it’s really about science, and in particular what happens when science looks at the full nature of reality, including unusual subjective experience and consciousness. Because I want to promote it as a science book, I sought endorsements from my scientific colleagues, so I’m very grateful that it has been endorsed by two Nobel Laureates, a president of the American Statistical Association, a program director from the National Science Foundation, and etc. I could have asked historians, notables in the human potential arena, and ceremonial magicians for endorsements. But there are plenty of books available from those angles. This one is different.

Can you tell me about your early experiences with synesthesia? What forms did you have? When did you notice it?

DR: I didn’t realize that tuning my violin strings according to their colors was unusual. The E string was a clean silver, A was ​a pleasant blue, D was a rich orange, and G was an earthy green. When the string was at the right pitch, the color also carried a feeling tone, hence terms like clean, pleasant, rich, and earthy. I think I was always aware of this, but I noticed it as a “thing” when I learned in my late teens that not everyone experienced sounds this way. This combined sound-color-feeling sense was not always welcome. I recall practicing my violin one day and becoming aware of something intrusive and “off.” I tracked that feeling to my mother, who was in a room on the other side of house, quietly humming to herself. The just barely audible humming, blocked by multiple walls and closed doors, felt so “loud” to me that I couldn’t practice. To this day if I’m listening to music and there’s other music or just a rhythm beat playing somewhere else, even very far away, it drives me to distraction.

Do you think having synesthesia when you were young “opened you up” to unexpected experiences?

​DR: No, because I don’t recall having any of the classic psychic experiences​ when I was young, and nor did anyone else in my family. In hindsight, I suppose I was highly sensitive and empathic (as many young children are), but not in a way that today I would call psychic. I was attracted to parapsychology mainly out of curiosity. I was always curious about everything, and I’ve never found anything more curious than phenomena like psychic phenomena because they tell us that something about our common sense understanding of reality is missing something important. Of course, this is also what mystics have been trying to tell us throughout history, so I’ve learned to pay close attention to that literature as well.

Are we at a crossroads in science? Does your new book signal the death of materialism?

​DR: Science is always advancing into new territories, so what I’m proposing in Real Magic is just part of that evolution. Today’s version of materialism is still quite robust, and it will likely remain so for a long time because it’s very effective for learning about certain objective aspects of reality. But materialism doesn’t cover the whole territory, and that’s where we’re seeing rising interest in expanding our scientific worldview to embrace what philosophers have called idealism.

Real Magic explores the challenges of fitting psychic, mystical, and magical experiences into the scientific worldview (which is only a few hundred years old) by carefully considering the wisdom of the esoteric traditions (which are many thousands of years old). It’s in that ancient lore, most of which is still vibrantly alive today, where we find clues about the next big advancements in science. Those advancements will entail a change in our basic assumptions about reality. Consciousness will be placed front and center, rather than relegated to the far fringe as a meaningless epiphenomenon, which until recently has been a basic tenet of academic psychology and the neurosciences.
​