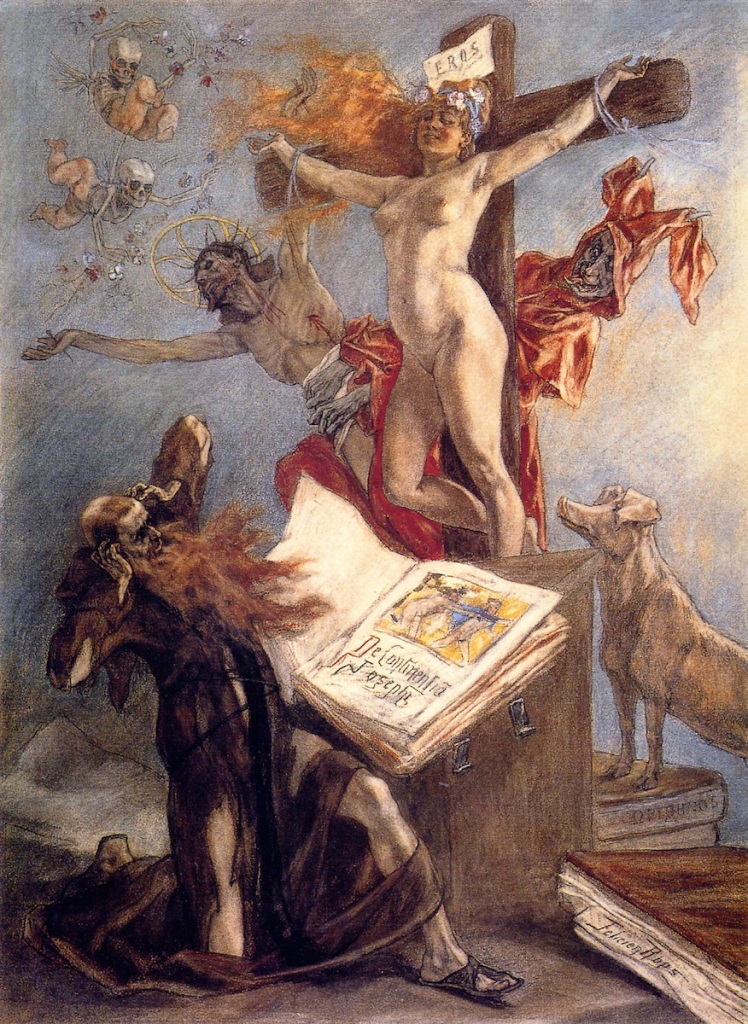 I thought I’d begin a series of blogs about mysticism since the subject is vitally important to understanding almost all areas of anomalous psychology, which we often term the paranormal. It’s been a subject of great interest to me personally for many, many years.

First a word about the painting. It’s titled Temptation of St. Anthony by Felicien Rops (1878). I feature it in this opening piece about mysticism because of its archetypal significance to tarot. It invites contemplation. Let us consider this painting an exemplar of the archetype of repression, the primary mechanism the ego uses to ward off danger. The woman who has replaced Christ on the cross symbolizes the nature of Anthony’s temptation, which horrifies him. The pig, by the way, is one of St. Anthony’s attributes, his totem or spirit animal.

I should also mention that this particular St. Anthony is St. Anthony the Abbot, the Father of Monasticism. If you studied theology, you remember him as one of the Desert Fathers and Mothers, the ascetic monks and hermits who lived in the Egyptian desert in the third and fourth centuries. That’s significant because all mystics are necessarily reclusive, albeit these days not to such extreme degrees. All tarot enthusiasts are either mystics in some stage of spiritual development or frauds.

After Christianity hitched its wagon to Greek philosophy, it was never able to develop a strong tradition of mysticism – a dialog with the Otherworld. That’s because the word theoria in Greek means contemplation (meditation), a subjective process, whereas in the West the concept morphed into theory, something objective to be analyzed, measured and defined.

Inspiration we receive from the Otherworld, and tarot, should be contemplated. This may be why tarot shares far more in common with feathery Eastern thought and shamanic philosophies (Celtic, African, First Nations) than with weighty dogmatic monotheism.

One of Chrysalis’ built-in goals is to assist you in raising repressed and suppressed fears and memories into consciousness. In other words, Jungian shadow work. Becoming self-aware of your unconscious mind, by definition, will raise all kinds of flotsam and jetsam to consciousness. This act of will alone removes 99% of mind-clutter that skews effective communication with the Otherworld.

Rops penned these words about his painting, “Jupiter and Jesus did not carry off eternal Wisdom, nor Venus and Mary eternal Beauty! Even if the Gods are gone, Woman remains. The love of Woman remains and with it the abounding love of Life.”