“A dark and powerful warrior’s face in blacks and reds. He wears a steel helmet, broad square face, open mouth with square teeth and a full black beard.” That’s Tammo de Jonge’s description of the Warrior archetype from his The 12 Faces of Humanity artwork.

As we all know, Chrysalis Tarot may correctly be called a “feminine tarot deck.” Traditional tarot, by contrast, is decidedly masculine and patriarchal. In Chrysalis, we emphasize the Divine Feminine, Earth-centered spirituality, healing, intuition and, above all else, balance.

In our schema, we emphasize many other attributes commonly associated with the Divine Feminine: goddess archetypes, anima and yin symbology, and the importance of the right brain to spiritual growth. In other words, Chrysalis relies upon symbols, patterns and free-flowing feelings, emotions and correspondences.

You will find the exact opposite characteristics in the Warrior archetype. Warrior energy is more commonly associated with the left brain: controlled feelings, logic, and rigid structure. Tricksters have warrior-type characteristics and are generally male figures because tricksters are antistructural agents who help restore balance by restraining or derailing the status quo. This is not to suggest the Warrior archetype is inherently negative. Not at all; he is a transitional archetype who manifests negative energy only when ungrounded.

Herne the Hunter fulfills the Warrior’s role in Chrysalis. He himself is a facilitator of change and well grounded Gatekeeper of Higher Consciousness.

For thousands of years, most of humanity has been living a patriarchal paradigm that has no firm grounding in Divine Feminine attributes. Consequently, we witness rampant aggression, oppression of women, endless wars, and heavy-handed religious dogma instead of holistic spirituality marked by interconnection and a commitment to personal growth.

Fortunately, things are rapidly changing. Once the dust settles, consciousness will  evolve to unimaginable new heights and the world will be a better, more balanced place. This will happen in part because women themselves will form the vanguard of a new warrior class called Rainbow Warriors. 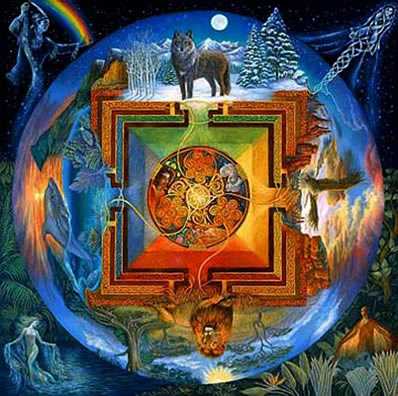 “There will come a day when people of all races, colors, and creeds will put aside their differences. They will come together in love, joining hands in unification, to heal the Earth and all Her children. They will move over the Earth like a great Whirling Rainbow, bringing peace, understanding and healing everywhere they go. Many creatures thought to be extinct or mythical will resurface at this time; the great trees that perished will return almost overnight. All living things will flourish, drawing sustenance from the breast of our Mother, the Earth.” ~ from the Rainbow Prophecy as purportedly passed down by women of the Cree Nation.

Collective Unconscious archetypes provide filters and focus for our lenses of perception and imagination. As the Warrior archetype completes his mission and subsides, the pendulum swings in the opposite direction and balance is restored. Remember, the reemergence of the Divine Feminine does not mean a return to Minoan Civilization matriarchy; quite the contrary, the essence of the Divine Feminine seeks eternal balance.

(This blog is the 8th in a series inspired by artist Tammo de Jongh’s, “The 12 Faces of Humanity.” See the “Recent Posts” section below for the previous blogs.)