Artist Tammo de Jongh created an image of a scientist to represent his Observer or Sage archetype. It was an interesting choice in that we seldom associate scientists with spiritual nouns such as archetype, a term frequently used in analytical psychology and metaphysics. That’s because we’re mostly unfamiliar with the metaphysical dabblings of many of the world’s greatest thinkers.

Einstein himself wrote, “The intuitive mind is a sacred gift and the rational mind is a faithful servant. We have created a society that honors the servant and has forgotten the gift.” Einstein believed that imagination was more important than knowledge.

Issac Newton was as interested, perhaps even more interested, in alchemy and in re-discovering the occult “Wisdom of the Ancients” than in science. Another example is the renown astronomer Johannes Kepler, who gave us the laws of planetary motion. Kepler himself was infatuated with astrology. One volume of his collected works is filled with hundreds of his horoscopes.

French Philosopher and Nobel Laureate Henri Bergson championed depth experiences and intuition over rationalism and science as avenues to understanding the true nature of reality.

Great minds are observant minds. Observers are often found on the edges of society where their introverted personalities can best protect their sensitive souls. But the observer archetype exerts a significant degree of influence on the personalities of many not-so-great minds. One’s personality is an expression of many unrelated archetypes. This is why in tarot some archetypes will resonate with more clarity than others. These archetypes are seen as kindred spirits or souls.

Which Chrysalis archetypes are your kindred spirits? The answer to that question will reveal much about your personality and even suggest areas in need of psychological development or shadow work. Do you need to become more like our Chrysalis observer, the Celtic Owl? 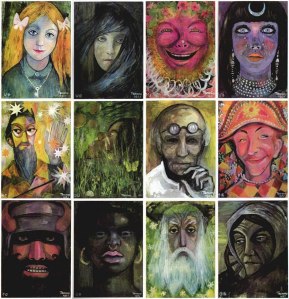 This multitude of resonating archetypes is one reason we describe Chrysalis as polytheistic, for lack of a better term. Polytheism itself is defined as a belief in many gods. But we don’t use the words god or goddess in any literalistic sense, but rather as memory aides that permit us to resonate, heal and connect using a rich variety of mythological values, i.e. kindness, compassion, mercy, intuition, freedom, curiosity, etc.

In Chrysalis, depth experiences come from this connection to the Otherworld, a connection facilitated by the deck’s archetypes and by the user’s imagination, intuition and open mindedness. Collective Unconscious archetypes are, “the deepest patterns of psychic functioning and fundamental fantasies that animate all life,” wrote Jungian analyst James Hollis in The Archetypal Imagination.

While these archetypes are found in the human psyche, they are indigenous to the Otherworld where they exist as coherent, dynamic fields of information. In tarot readings, we exchange information with them about who we are (Self) and about destiny (Higher Self). They help us reach our fullest potential as human beings, evolve our personal and collective consciousness, and grow in knowledge and wisdom.

Working with Chrysalis is, “polytheistic psychology, in that it attempts to recognize the myriad fantasies and myths, gods, goddesses, demigods, mortals and animals—that shape and are shaped by our psychological lives” – James Hillman.

The first blog in this series can be found here.

One thought on “The Observer or Sage Archetype”