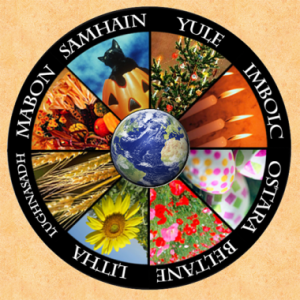 The People of the Woods and the Old Ways are dear to many of us for many reasons. These include a profound reverence for the Earth and all living creatures, plus a rejection of the notion that “dominion over the Earth” gives humans license for unrestrained abuse and exploitation. Quite the contrary, in dominion theology the word itself implies benevolence.

For better or worse, our current worldview has been shaped by the creation stories told in Genesis. That’s right, there are two Biblical accounts of creation, and they differ considerably.

We are most familiar with the dominion theology version – the hierarchical, authoritative account of human origins based upon privilege, power and preeminence of the masculine. This version is contrasted by a second – a theology of dependence based upon servanthood, humility and mutual respect.

In this less familiar story of creation, which can be found in Genesis 2, the first humans were created from the arable soil, as were all other life forms. There is no heavy-handed hierarchy; masculine and feminine principles exist in perpetual balance, and humankind holds no distinctive position over other life forms in  dependent theology – a cornerstone of both Chrysalis and The Craft.

Another commonality between Chrysalis and The Craft is the observance of rituals marking the Wheel of the Year and the eternal cycle of life. So we can readily associate a Chrysalis archetype with one of the seasonal festivals, or Sabbats as they are known in Neo-Pagan and other pre-Christian traditions, I devised this list with the caveat that there are various other ways (perceived similarities) to align the sabbats with Chrysalis archetypes, Troupe and pip cards.

Green Man as the Oak King bids adieu to the Holly King to symbolize re-birth of the solar god. Sacrifices, gift giving and lavish feasting have always been popular Midwinter customs since the Old Stone Age.

Ariadne welcomes spring appearing as the Maiden aspect of the Triple Goddess. Decorating eggs, a sign of fertility, was an annual custom at this time of year. Ostara is a Germanic fertility goddess whose attributes include the hare and egg. The word Easter was derived from her name.

Litha is the time of the sacred marriage of the god and goddess. It’s a gentle time when youth turns to wisdom, as allegorized by Merlin. The Venerable Bede, another great sage, wrote, “Litha means gentle or navigable, because in both these months the calm breezes are gentle and they were wont to sail upon the smooth sea.”

Mabon is a great harvest festival and a time for offering thanks for Earth’s abundance. Storyteller represents the goddess in her crone aspect. She bestows blessings on the community for protection during the cold months of the coming winter.

As the Earth quickens and ewes begin milking, the new born lambs and baby god will be nourished. The goddess is purified and cleansed (spring cleaning ritual) as she prepares to return to her maiden aspect.

Beltane (bright fire) heralds a raucous celebration of mysticism and magic replete with bonfires, mead and Maypoles to welcome summer. Morgan subsumes attributes of Flora, the Roman goddess of flowers, for this festive occasion.

The bread harvest – the first fruits. The goddess as mother imbues the Earth with the energy of abundance. This is the first of the three Wheel of the Year harvest festivals. The other two are Mabon and Samhain. The Sabbat is also known as Lughnasadh, named after the Gaelic god Lugh.

This is the time of the Wild Hunt when the curtain between the worlds is lifted and the ancestors roam the moony shadows (Halloween or All Hallows Eve). It is a grand festival of darkness that’s balanced on the opposite side of the wheel by Beltane, the festival of light.

An excellent book on Spiritual Ecology.