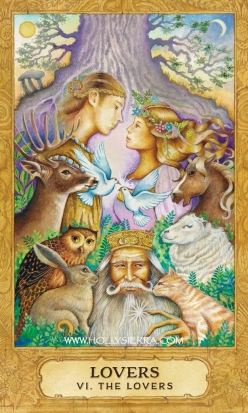 Our two lovers are none other than King Arthur and Brigid, the Celtic Goddess of Hearth and Home and the Keeper of the Sacred Flame. But this celebration is far more than an ordinary wedding in the woods. It represents the archetype of the Sacred Wedding also known as the hieros gamos, an alchemical “union of opposites” not well appreciated today.

In the sacred wedding of Arthur and Brigid, sun and moon are symbolically joined together, opposites are reconciled and made whole (male and female, anima and animus); the two become as one and confer divine grace upon one another. The sacred marriage of Osiris and Isis is another example of the unifying mythology of hieros gamos (sacred marriage).

Wedding announcements went out to all the creatures of the forest. It was an invitation to a “New Golden Age,” symbolized by King Arthur and Brigid’s marriage.

We feature this card today to honor and commemorate a remarkable feast of synchronicity. The new Chrysalis companion book is to be published on February 1, which just so happens to be Imbolc or Brigid’s Day. It’s indeed a fitting feast of synchronicity, so to speak, that the book’s publication falls on one of the four major Celtic feasts to celebrate the seasons of the year, and on Imbolc in particular.

Imbolc marks the start of the Celtic spring, a time of new beginnings when the Crone of Winter Past loosens her icy grip on the soil so young life can sprout. It’s the time of the first milking of the

ewes (note the white ewe in The Lovers art) and of making Brigid Crosses  from rushes and then proudly hanging them on farmhouse doors until replaced by the new batch next spring. The Pagan crosses invoked Brigid’s maternal and eternal protection as the Celts’ beloved goddess of hearth and home.

As keeper of the perpetual Sacred Flame, Brigid, along with her 18 priestesses, symbolize the 19 moons that comprise a metonic cycle, a bygone method of reckoning time. Her sacred flame still burns brightly today in Kildare just as it has done for thousands of years. The flame reflects the march of time; nature’s continuing cycle of life, death and rebirth.

When I lived in Cornwall, UK, I often came across holy wells dedicated to Brigid that dotted the lush countryside along with the stone circles and other ancient megalithic monuments that contribute to the legends of the Mystical Isles. The Merry Maidens stone circle was a brisk walk from where I lived near the former art colony in Lamorna. One such Celtic standing stone, or menhir as they’re known locally, is featured on Chrysalis’ Ace of Stones, and Stonehenge itself graces our Eight of Stones.

Since Brigid played a hugely significant role in the creation of Chrysalis as a nurturing mother who sweetly whispered gentle inspirations, Holly and I are honored and touched that our new book will be published on her special day.

* Our new book is now available from Amazon and metaphysical booksellers everywhere. 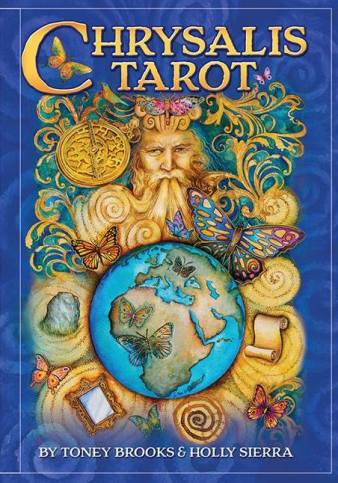