People have long accepted that political power is man-made rather than god-given. But it’s been different for gender equality. History, religion, science, everything in fact, has seemed to condemn feminism for being against the natural order.

Are there examples of true gender equality in the history of mankind? And if so, how far do we have to go back?

It’s hard to get one’s 21st century head around the Catalhöyük settlement, which existed from approximately 7500 – 5700 BC. 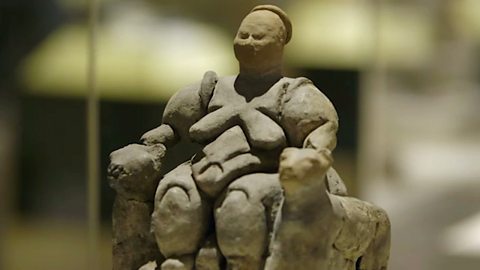 The Seated Woman of Catalhöyük (6000 BC)

Its early inhabitants lived at the dawn of agriculture. They had semi-domesticated animals and were learning to sow crops. Not only did women have the same diets as men and inhabit the same physical space, but there were no wider hierarchies in the community.

Professor Ian Hodder explains, ‘there is no evidence of a big ceremonial centre or a chiefly house. We see these houses that look like they could produce more and could become quite dominant but there seems to be a cap that stops them doing it.’

Catalhöyük has a special significance for anyone interested in women’s history. It is the lynch pin in the Mother Goddess argument. According to this theory Stone Age society was matriarchal, peaceful, spiritual and sexually uninhibited. Women were respected for their life-giving powers, and the feminine mysteries were worshipped.

In the 1960s, the swashbuckling archaeologist James Mellaart found at Catalhöyük one of the most powerful representations ever made of female divinity. Known as the ‘Seated Woman of Catalhöyük’, or more popularly the ‘Mother Goddess’, it is a clay figurine of a corpulent woman sitting on a throne, flanked by two large leopards, who appears to be giving birth. As he continued his excavations Mellaart unearthed a treasury of female imagery and figurines.

For Mellaart, and many others, this was the confirmation they sought for the Mother Goddess theory. Catalhöyük was proof that patriarchy was no more ‘natural’ than the pyramids.

When Professor Hodder took over the site, it wasn’t his intention to be controversial. Nevertheless, his findings have been revolutionary. His team dug through 18 levels, covering about 1,200 years of uninterrupted habitation. They found no evidence to support the claim that Catalhöyük was a matriarchy or that female fertility was worshipped over and above that of phallic or animal spiritualism.

But, Hodder insists, the question should never have been posed as an either-or issue. He argues that his team’s discoveries are so much more significant than anything previously imagined. Catalhöyük was a place were true gender equality flourished.

Read more: Dr Amanda Foreman discusses what we can learn from Catalhöyük

When did women’s rights begin to be restricted?

When did civilisation begin to restrict women’s rights?

In 4,000 BC women had equality with men in Ancient Sumer, now modern-day southern Iraq.

In ancient Sumer – now modern-day southern Iraq – women enjoyed the same privileges as men in both society and commerce. But when the Akkadian King Sargon conquered, and Sumer became a Vassall state, the outlook for women drastically changed.

The patriarchy promoted by law

When civilisations begin to write down their laws, this is when the patriarchy becomes enshrined. There is a phrase on the Enmetena and Urukagina cones – the earliest known law codes from circa 2400 BC – that says “If a woman speaks out of turn, then her teeth will be smashed by a brick.” If a woman speaks out of turn, then her teeth will be smashed by a brick.
Enmetena and Urukagina cones (2400 BC)

Later, the Code of Hammurabi (circa 1754 BC) of ancient Mesopotamia proved a mixed blessing for women. The laws recognised the right for women to own property, while also forbidding arbitrary ill-treatment or neglect. In widowhood, wives were allowed to use their husband’s estates for their lifetime.

However, the code was a blow to women’s sexual freedom. Husbands and fathers now owned the sexual reproduction of their wives and daughters. This meant that women could be put to death for adultery and that virginity was now a condition for marriage.

Some of the starkest double standards exist within the Assyrian laws from 12th century BC. Husbands could abuse (and even pawn) their wives freely, with the only restriction being they couldn’t kill them without cause. Women in Assyria had no rights and many burdens. If they have an abortion they can be executed, if they commit adultery they can be executed. And if their husband commits a crime, they can be punished in his place.

Within these laws there are the earliest examples of enforcing the veil, long before it was adopted by the Greeks, Romans, Byzantines, Christians and Muslims. However, not all women are required to wear one.

The laws specify that wives, daughters and, indeed, concubines of the upper classes should not go outside uncovered. On the other hand prostitutes were not entitled to wear the veil, and any man seeing a prostitute wear the veil is to arrest her and she will receive ’50 lashes with a bamboo cane’. If a slave-girl is seen to be wearing a veil, she too is to be arrested; in this case her ears will be cut off and the man who arrested her may take her clothes.

Read more: BBC iWonder on what the veil means to different people and throughout history

The Ascent of Woman on BBC Two

Dr Amanda Foreman covers and explores the above topics in episode 1 of Ascent of Woman: ‘Civilisation’ on BBC Two 2 September at 9pm. The episode will be available to watch on BBC iPlayer shortly afterwards. 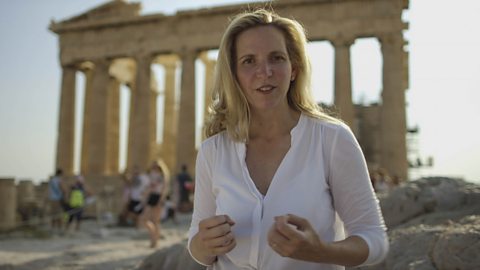 In Anatolia, she visits Catalhöyük, one of the world’s earliest settlements, which archaeologists believe held remarkably different notions of gender. From Mesopotamia, she explores the world’s first law codes written to regulate women’s status and behaviour, including the world’s first known veiling law, two millennia before the advent of Islam.

Across Europe and the Near East, she uncovers a group of extraordinary women who created their own routes to power in male-dominated worlds. These include Enheduanna, the world’s first recorded author, the Ukok Ice Maiden, one of the great archaeological discoveries of the 20th century, and Hatshepsut, one of ancient Egypt’s most successful but most maligned ruling queens.

Crucially, she also explores the darker legacy of gender inequality in ancient Greece, whose influential ideas on the inferiority of women have cast a long shadow over women’s lives across the globe to this day. Amanda’s approach aims to profoundly alter the accepted view of civilization once and for all.